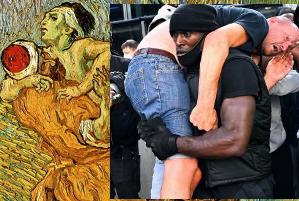 London (CNN) The black man seen carrying an injured white man to safety during a chaotic scene at protests in London told CNN he did it to avoid catastrophe. The image of Patrick Hutchinson’s selfless act has now spread across the globe. Hutchinson told CNN on Sunday it was the first Black Lives Matter protest he attended, and he helped the white man on Saturday because he didn’t want the main reason for the protests to be lost in one moment of violence. Protesters in London and all over the world have taken to the streets calling for police reform after the deaths of black people at the hands of police. These deaths most recently include George Floyd in Minneapolis and Rayshard Brooks in Atlanta. „My real focus was on avoiding a catastrophe, all of a sudden the narrative changes into ‚Black Lives Matters, Youngsters Kill Protesters.‘ That was the message we were trying to avoid,“ Hutchinson said. Hutchinson told CNN he initially saw the man lying on some stairs in the fetal position surrounded by protesters.  A group of men including Patrick Hutchinson (carrying the man) help an injured man away after he was allegedly attacked by some of the crowd of protesters on the Southbank near Waterloo station. At that moment, he said it didn’t cross his mind the man may be a counter protester or hold prejudices, but he was trying to get him out safely. „I have no idea who this man was. All I know is that he was there, up to no good, let’s just say,“ Hutchinson told CNN on Monday. „He wasn’t here to support Black Lives Matter.“ More than 100 people were arrested in London protests Saturday after violence broke out as far-right groups targeted BLM protests. CNN has not been able to independently verify what the injured man was doing at the protest before the incident or why he was there. CNN has not yet been able to identify the injured protester. When Hutchinson saw the man, he said he and his friends formed a cordon around him and Hutchinson scooped him up to take him directly to the police. While they were marching, the man could still feel people trying to hit him, Hutchinson said. „I am carrying him, my friends are protecting myself and the man on my shoulder. He was still receiving blows, you can feel people trying to hit him,“ he said. „There were people trying to protect him at the same time carried him over to the police and I said here you are. One of them said ‚thank you – you did a good thing there.'“Hutchinson attended the protests Saturday because „history was in the making,“ he said, and it was a „no brainer“ to support the cause. He added that he would like to break down the race barriers and for people to realize, „we are all one race.“

„I want to see equality for everybody. I am a father, a grandfather and I would love to see my young children, my young grandchildren, my nieces, my nephews have a better world than I have lived in,“ Hutchinson said. „The world I live in has been better than my grandparents and my parents and hopefully we can continue until we have total equality for everyone.“ Hutchinson said he’s glad people look at the image as one of humanity and that people all over the world can learn from it, especially police officers in the US.“Just because somebody’s up to no good, doesn’t mean you have to kill them,“ he said.